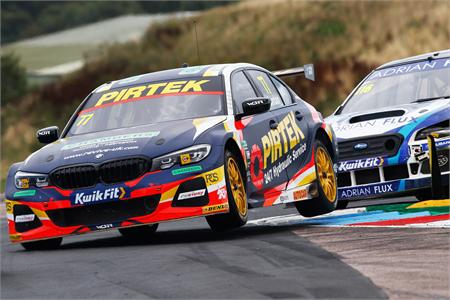 BMW Pirtek Racing’s Andrew Jordan will look to secure a big haul of points to maintain his challenge for the Kwik Fit British Touring Car Championship when the series heads to Knockhill this weekend for the eighth meeting of the campaign.

Andrew makes the long trip to Scotland sitting second in the championship standings behind fellow BMW driver Colin Turkington, and closed to within 30 points of the defending champion last time out at Thruxton.

With only nine races left to run this season, a strong performance at the Fife circuit this weekend is vital as Andrew seeks to secure a second championship title.

The 30-year-old has a solid record at Knockhill in the past, dating back to his debut season in the series when he secured a podium finish in a Honda Integra.

Since then, Andrew has only failed to score points twice in 33 starts at the Scottish venue, with an astonishing record of 28 top ten finishes including race wins in both his 2013 title winning season, and in the corresponding meeting last year.

Whilst his new BMW 330i M Sport will be competing at Knockhill for the first time, the tight and twisty nature of the circuit has played to the strengths of rear-wheel drive cars in recent season.

Carrying 48kg of success ballast into the weekend thanks to his championship position will add to the challenge, but Andrew remains optimistic about his chances of on-track success.

“Knockhill is a circuit that I really enjoy and one that suits my driving style,” he said. “It’s so tight and twisty that it can be difficult to hook up a lap, particularly when there are 29 other drivers also trying to do the same thing.

“We’ve seen already this season that the 330i M Sport is a step forwards from the old car, and I’m hopeful that the same will be true at Knockhill considering how well the 125i M Sport went there in the past.

“The extra ballast we have to carry into the weekend isn’t going to make things any easier, but Colin is in the same boat and I have to focus on trying to make sure I qualify ahead of him on the grid and then try to make further inroads into his advantage on race day.

“With only nine races left to run, a big haul of points this weekend is crucial, and I’m heading to Scotland confident about what we can achieve.”