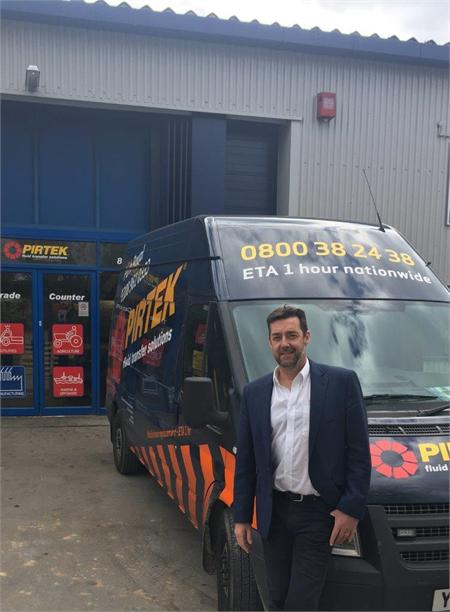 With five London-based Pirtek franchises under his belt, Andy Williams is one of the company’s most successful Licensees.   His story is made even more remarkable by the fact that he started with a spanner in his hand.

After leaving his first job as a tools salesman, Andy Williams joined a major independent plant company – National Plant Hire – in London as an apprentice plant mechanic.   He advanced to mobile plant mechanic, looking after the City and West End of London and was promoted to Service Manager when the business was acquired by HERC (Hertz Equipment Rental Corporation).   At the time HERC, via its US operations, was regarded as the second largest plant equipment hirer on the planet.

Despite developing in a more structured corporate environment, Williams had ambitions to operate in a more sales focussed role and subsequently joined another independent plant hirer in the role of a depot manager with this aim in mind.

But Williams already had bigger, more diverse aspirations. “The construction industry was suffering, plant hire was hugely competitive with reducing margins and I was keen to explore working in other sectors to try to find my own niche,” he recalls.   “I was aware that Pirtek worked across multiple sectors and I saw them as a stepping stone whilst I decided precisely which direction to point my career.   I’d been fortunate to enjoy working for some great mentors, I already had relationships with existing and potential Pirtek users and had a good mix of skills acquired from working in an independent and corporate structure.   I joined Pirtek Park Royal in 1993.”

That move proved both timely and successful; but it was not to fulfil his “stepping stone” plan.   Rather, it was to introduce him to a brand and a business model that would draw him in.   “I joined Pirtek Park Royal as a mobile sales and service technician (MSST).   I was given the Centre’s latest van, taking the fleet to five in total,” he says.  Pirtek was developing its network across continental Europe and within twelve months the Park Royal general manager joined Pirtek Europe to provide training as the network rolled out.   “I applied for the general manager job, was successful and then worked with the owner to develop the team and offering to a wider audience and rapidly,” he continues.   “Within just a few short years, that fleet had grown to 16 vans, making it the biggest Pirtek Centre at the time.”

That success was built upon constantly adding trained personnel in additional mobile service units in order to offer reduced and unequalled attendance times to customers locally. The Pirtek network had also progressed to enable a true national service offering and the business starter to enjoy more transient business as the nationally based customers increased their usage of Pirtek. Three technical salespeople for speciality enquires were also employed and developed in order to continually drive sales.

Having developed the Park Royal operation and wishing to become a business owner in his own right, Williams – somewhat surprisingly – then chose to leave to start a new industrial cleaning company specialising in graffiti, chewing gum and algae removal and which counted Tesco, McDonalds, TFL and many local authorities amongst its customers.

But he was never quite cured of the Pirtek bug.   “Pirtek was always niggling away in the back of my mind,” he says. “I remember being in Aberdeen with a team of 20 staff when we suffered a breakdown in the middle of the night. Local hose suppliers either didn’t answer their 24 hour hotline or said they could be with us in three or four hours.  The local Pirtek Centre attended in 30 minutes and had us up and running within the hour.  That level of commitment just reinforced my faith in the brand and it drew me back in.”

During Williams’ absence, Pirtek Park Royal had been split into four individual franchise operations.   Pirtek Park Royal remained, although on a considerably smaller scale, while Pirtek Kings Cross, Pirtek Isleworth and Pirtek Watford had been set up alongside.   “I bought Park Royal in 2003.   Despite having been carved up into now four territories, it was still a thriving business,” Williams says.   “We had just three vans but, more importantly, we had good staff and a strong and loyal customer base.”

Yet still Williams’ career aspirations were not sated.   Within just three years, he had acquired Pirtek Isleworth “to step up the local service” and to provide a broader offering in West London.

Having experienced the Docklands boom in his previous career, he was quick to spot the potential boom that would come from London’s successful Olympic bid, swiftly adding Pirtek Leyton to his portfolio alongside the newly acquired Pirtek Watford.

To complete his set, he then sold Pirtek Isleworth to his then Centre Manager Steve Spicer, before acquiring Pirtek Kings Cross. The most recent addition to the group is Pirtek Slough that was acquired in February 2016. The Pirtek Slough territory supports Heathrow Airport.

For most Pirtek Licensees, the running of a single Centre is a full-time job.   So how does Andy Williams juggle five?   The answer is simple, he says.   “I develop staff and I pay good wages to help retain those staff. Hopefully they feel part of a Pirtek family”

It is a system that works.   Across his five Pirtek Centres, Andy Williams now employs 39 staff and has a combined fleet of 22 mobile service vehicles, all overseen by what he calls “an exceptional management team”.   “I have no real issues with staff retention,” he insists.   “My philosophy is to employ the best people and they will deliver the very best service to customers.”

To reinforce that philosophy, Williams makes full use of the Pirtek Academy to ensure that his staff are not just hand-picked but highly trained.   This is backed up by specialist training to meet the specific needs of individual industry sectors and applications including advanced hydraulics courses, pneumatic and accreditation to the British Fluid Power Association.

Such commitment to the career development of his team has paid dividends with many of his staff following the path that he pioneered, rising swiftly through the Pirtek ranks and becoming Pirtek converts along the way.

“The Pirtek franchise is a finely-honed and proven business model that is based on a superior service offering.   It is continually developed by peer-to-peer relationships, with engineers selling to engineers and operators, managers selling to managers and directors selling to directors. The national impact of this Pirtek culture is immense,” Andy Williams concludes.   “For me, the Pirtek franchise offering provides great opportunities at all levels of the business, as long as you stick to the model. Pirtek UK provides support where necessary and if called upon, it operates many specific franchise steering groups to seek the advice from the network sought from a mix of many different Pirtek licensees.   I now own five successful Pirtek Centres.   The results just speak for themselves.”