Pirtek Racing and Jamie Caroline out to maintain advantage at Thruxton 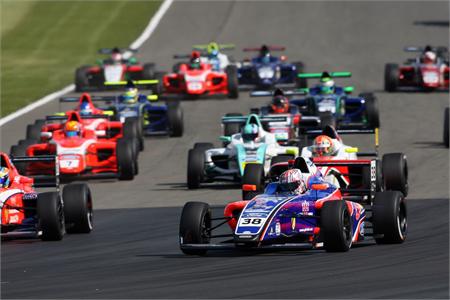 Pirtek Racing’s rising star Jamie Caroline will look to maintain his impressive start to the F4 British Championship certified by FIA – powered by Ford EcoBoost season when the series heads to Thruxton for the third meeting of the year.

Double victories at both Brands Hatch and Donington Park at the wheel of his Carlin-run car mean Jamie holds an impressive 40 point lead in the championship standings having firmly established himself as the man to beat in the hotly contested junior single-seater series.

Pre-event testing at the circuit last month saw Jamie post the second quickest time, with the teenager now looking to build on the already impressive record he has enjoyed at the fastest venue on the calendar in recent years.

It was at Thruxton where he secured the first victory of his car racing career back in 2014 when racing in the Ginetta Junior Championship, with a further podium finish the following season helping to kick-start his charge towards the Ginetta title.

Jamie also took to the podium last year in his rookie season in British F4, with a strong drive in the second race of the weekend being rewarded with the runner-up position.

That race saw Jamie joined on the podium by friend Billy Monger, who continues to recover in hospital from the accident at Donington Park three weeks ago that resulted in doctors being forced to amputate both of his lower legs.

Jamie and his fellow British F4 drivers will show their support for Billy during the weekend ahead, with the 18-year-old admitting that his fellow racer was still at the forefront of his thoughts.

“It’s been a difficult time for me after Billy’s accident at Donington Park, and the way that people have come together to support him has been unbelievable,” he said.

“I haven’t stopped thinking about Billy in recent weeks and he’ll be right in my thoughts when we go racing again this weekend, particularly as its his 18th birthday on Friday.

“There’s no doubt at all that I’ll be racing for Billy this weekend and I’m determined to score some good results for him.

“Personally, we’ve had a really good start to the season with four wins in six starts, and we showed in testing that we should also be in the mix again this weekend. I’m hoping we can pick up some strong points to at least maintain the lead we have built up already, and if we could extend it even further then it would be fantastic.”

The Sunday races will be broadcast on ITV4, with live timing and results from the weekend being available at www.tsl-timing.com