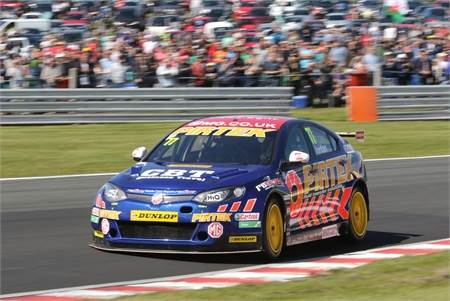 Pirtek Racing’s Andrew Jordan was right at the front of the action during rounds 10, 11 and 12 of the Dunlop MSA British Touring Car Championship at the Oulton Park circuit in Cheshire (6/7 June). Three top four finishes, capped by second place in the final race of the weekend has put him firmly into the title race.

Andrew went into the weekend at the demanding Cheshire track confident of having good pace in the works MG6 GT run by Triple Eight Racing. That confidence proved well placed when he qualified a strong fourth fastest on Saturday. “The car has turned a corner and we’ve made good gains. The car felt good during a race run in free practice,” he said.

Andrew elected to run the soft tyres in race one and was able to maintain fourth place in a race that was halted early after an accident. From third on the grid for the second race, Andrew was again able to maintain that position, running within a second of winner Jason Plato for much of the race. In the grid draw for the day’s third race, Andrew got fourth place and was soon up to third behind Matt Neal’s Honda.

After a fierce battle, Andrew worked ahead of Neal and set about chasing the BMW of race leader Sam Tordoff. Over the closing stages Andrew narrowed the gap to Tordoff and was almost close enough to challenge. Just a quarter of a second separated them at the flag. “I could sniff a win in the last race but I couldn’t quite get to him,” said Andrew. “Sam was strong in the key areas and had very good traction.”

All round, it was an excellent weekend for the Pirtek Racing MG. “That’s better,” said a delighted Andrew. “I’m really quite relieved that we’re where I thought we should be. We’re still not quite there: the Honda and Jason in the VW are one or two tenths quicker, but we’ve got something now that we can fine tune. To keep getting these points’ hauls is really good and we’re firmly in the championship hunt. The top four in the championship are now separated by 13 points. So it’s a good job we’ve been consistent on our tough weekends. I’m really, really pleased.”

Pirtek is Europe’s number one provider of hydraulic solutions and mobile hose replacement, with over 170 centres supported by over 700 mobile service workshops throughout Europe. Offering solutions to a number of business sectors, including the automotive industry.